Yes, today we’re talking doping.  The use of performance enhancing drugs has had a long history at the Olympic Games. Its origins can even be traced back to the Ancient Olympics. Athletes were also known to drink “magic” potions and eat exotic meats, such as lizard, to try and gain an athletic edge on their competition.

Back then, men were required to compete naked…but that’s a different story!

In the modern Olympic era, chemically enhancing one’s performance has evolved into a sophisticated science, but in the early years of the Modern Olympic movement the use of performance enhancing drugs was almost as crude as its ancient predecessors. 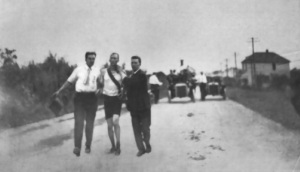 At the 1904 games in St Louis, Thomas Hicks, the winner of the men’s marathon was given  strychnine, eggs and brandy, before and even during the race.

This early example of “doping” certainly wasn’t the last. In 1957 a New England Journal of Medicine editorial commented on the dramatic improvements in performance at track and field events. The editorial considered the possible reasons for the recent epidemic of broken records.  It suggested that although training, diet antibiotics and motivation played a role, amphetamine use by athletes may be the main reason that otherwise unassailable records were being broken.

Performance enhancing drugs are not only a threat to the integrity of sport but can also have potentially fatal side effects. During a cycling event at the Rome Games of 1960, Danish cyclist Knud Enemark Jensen fell from his bicycle and later died. A coroner’s inquiry found that he was under the influence of amphetamines, which had caused him to lose consciousness during the race.

By the mid 1960s, sports federations were starting to ban the use of performance enhancing drugs, and the International Olympic Committee followed suit in 1967.

Despite this, each passing decade since has brought new scandals, new performance enhancing drugs, new testing methods and new methods to evade testing.

In 1984, the US Olympic Committee admitted that seven of its cyclists had received blood transfusions. Four years later, Canadian sprinter Ben Johnson was stripped of his gold medal from the Seoul Olympics when his urine samples were found to contain the anabolic steroid stanozolol.

Next came erythropoietin (EPO). The 1992 Games in Barcelona were even nicknamed the “Hematocrit Olympics.”

At the 2008 Games in Beijing the official slogan was “Zero Tolerance for Doping” . Even so, six athletes with positive specimens were ousted from the competition. Although this was far fewer than at previous games, it can’t be concluded that the prevalence of doping decreased as doping technology has become more sophisticated and athletes have turned to drugs that can’t be detected.

The list of drugs banned from the Olympicsis determined by the World Anti-Doping Agency. The banned substances and techniques include: androgens, blood doping, peptide hormones, stimulants, diuretics, narcotics, and cannabinoids.

Both experts and cynics are already asking, will future athletes turn to gene therapy…or have they already started? One thing’s for sure, the Olympics will remain an object of fascination for all the right and the wrong reasons.