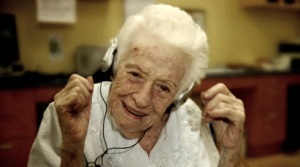 For as long as humans have pounded drums and plucked strings, listening to music has affected people’s sense of well-being, lifting their spirits, and calming their nerves.  Now, a new film suggests that the right music can change the lives of people suffering from Alzheimer’s and dementia.

The documentary “Alive Inside” shows the transformative power of music as several elderly dementia patients are given iPods loaded with their favorite music.

The film follows social worker Dan Cohen, who decides on a whim to bring iPods to a nursing home.  To his and the staff’s surprise many residents suffering from memory loss seem to “awaken” when they are able to listen to music from their past.  The previously unresponsive seniors quickly start to tap their toes, swing their hands, and, incredibly, start having long discussions about their passion for music and its role in their lives. 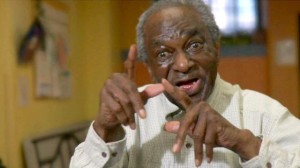 One man – Henry – becomes especially impassioned when he is asked what music means to him. “It gives me the feeling of love, romance,” he says. “I figure right now the world needs to come into music. The Lord came to me and made me holy, I’m a holy man. So he give me these sounds.”

With great excitement, Dan turns to renowned neurologist Dr. Oliver Sacks, and the film follows them both as they investigate the mysterious way music functions inside our brains and our lives.

Sacks best known as the author of 12 books, including: The Mind’s Eye, Awakenings, The Man Who Mistook His Wife for a Hat and Musicophilia says “Music imprints itself on the brain deeper than any other human experience. Music evokes emotion and emotion can bring with it memory and the feeling of life when nothing else can.”

Besides telling a moving story, the film’s producers hope it will encourage widespread adoption of personalized music programs in nursing homes and that it will inspire and educate the millions of people burdened by diseases that affect memory.  They also hope to create a grassroots demand for music therapy and potentially help not only patients but also caregivers across the globe.

Although Alive Inside focuses on one man’s journey, it raises many questions about what it means to be Alive Inside. It questions when we stop being human, and what it takes to re-start a life that has faded away. It asks questions about how we see our elderly, and how we are going to treat an epidemic of these degenerative diseases.

The filmmakers have had an early trailer online for more than a year, but it recently premiered in New York and interest has exploded in recent days, thanks to social media sites such as Facebook and Reddit  They have also been able to raise over $50,000 to make an edited version of the film and obtain copyright approval for songs heard on the film.

Producer /  Director Michael Rossato-Bennett says following the work of Cohen and Sacks was one of the most fulfilling things he has done during his 30-year filmmaking and photography career.

“Usually when you make a film you wait for a moment to make you cry and it might take three months,” he said. “On the first day of filming I cried like five times. There is something in seeing another person awaken. That does something to all of us.”

For more information about the film and music and memory please click here.