On-line weight loss programs, calorie-counting apps, and even Nintendo DS weight-loss coaching games are nothing new. But a novel gadget released this month by a Brazilian “diet reeducation program” takes the tactic to a whole new level.

Enter the Virtual Fridge Lock – a high-tech security device designed to foil late night fridge raids!  Subscribers to the Meta Real program can sign up to receive a giant red magnet. They then stick this on their fridge and synch it to their social networks. Once the lock is activated, the device sends a wireless alert to all their social networks whenever the fridge is opened.  By harnessing the power and speed of social media, the idea is that on-line friends will talk you off the dietary ledge by posting words of advice and encouragement. Or if your friends aren’t the supportive type – there’s always the public shame and humiliation approach.  Either way, the Virtual Fridge Lock is meant to help you stave off the midnight munchies and pass on that slice of pizza.

And while the Virtual Fridge Lock is only available to Meta Real clients, there’s a similarly humiliating app available free of charge to the general public: Aherk! offers a “self-blackmailing service” that encourages weight loss in three easy steps.

First, the dieter defines their weight loss goal. Second, in the words of their website ‘you put your ass on the line’ by uploading an unflattering picture of yourself to the site. And lastly, after your goal deadline expires, your on-line friends vote on whether or not you achieved your goal.  If, if their opinion you failed, the picture will be posted to Facebook.

Is public shaming is the key to weight-loss success or is it just a social media marketing sham?  Although, research shows that those trying to lose weight do better with a support network or buddy, we suspect there’s nothing like being publicly outed in front of your friends on Facebook and Twitter to keep you on the straight and narrow.

Word on Health is pleased to bring you a heartwarming story that demonstrates, in case there was any doubt, the power and reach of social media. 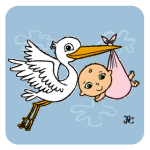 Smart, successful, socially aware San Francisco couple, Molly and Brian Walsh wanted a baby. When their efforts failed, they, like so many other couples, investigated in-vitro fertilization.  They had already saved about $10,000 towards the $12,000 treatment, when they found out that they actually needed closer to $30,000 for additional genetic testing of the fertilized embryos, to avoid passing on a rare, but incurable genetic disease to their offspring.

With their biological clocks ticking faster than their ability to raise the funds, the couple came up with a unique plan.  They decided to go public with their story and then host a series of fundraising parties, on-line auctions and other events.  These were announced to friends and strangers alike on their website, on Twitter, Facebook, Flickr and other social media.

Response was overwhelming and as a result they have already raised an additional $8,000.

Which begs the question, if one couple can achieve this through social media, what could you achieve?  The SRxA team of social media strategists is waiting to hear from you.

Patients and caregivers are empowering themselves in record numbers when it comes to managing their own health and the health of their families.  According to new data from Manhattan Research the internet has considerably more influence over consumer health decisions than traditional channels like print, TV and radio and even surpassed physicians as the most popular health resource for the first time last year.

The statistics are staggering.

But before physicians go hanging up their stethoscopes, Word on Health should point out that the study showed that healthcare professionals still have the strongest effect on consumer health behavior.

Studies such as this should help the pharmaceutical industry to plan and align their marketing strategy and ensure that online editorial health content and social media are included in the overall marketing mix.

Here at SRxA we’re thrilled to hear that the FDA is exploring the use of cutting-edge technology to help study and better understand adverse events.  Last week, Biovista Inc, announced that the FDA has licensed its advanced technology platform that is able to cross-correlate thousands of adverse events against any drug or combination therapy.

Ultimately, it’s hoped that this technology will enable physicians to predict which patients are likely to suffer side effects from a particular drug and thus make prescribing safer for patients.

After embracing this space-age technology we hope that the Agency will soon come to a decision about other  space-age media.  You, our readers, may have already heard of them: the Internet, the Blogosphere and Social Media!

Our team of certified Social Media Strategists is standing by!