Last week, the street.com -a leading online provider of financial news, commentary, analysis, ratings, business and investment content- took a major swipe at Big Pharma, in general, and Abbott, in particular. Under the headline ‘Abbott Helps Big Pharma Look Even Worse’ author Vince Crew, lambasts the drugmaker for its past marketing practices and warns that unless Pharma adheres to a zero tolerance policy for illegal practices, the industry’s reputation will be doomed forever. Here’s a verbatim copy of what he had to say –

“On May 7, Abbott reached an agreement with the federal and nearly all state governments to pay $1.6 billion in connection with its illegal marketing of the anti-seizure drug Depakote.

And yes, it’s even more despicable because it represents the unfortunate, illegal, unethical, typical temptation of off-label marketing — promoting a product for usage contrary to its approval.

Someone(s) at Abbott thought it a good idea, according to the Justice Department confirmation, to have a “specialized sales force” market Depakote in nursing homes to dementia patients, even though there was no evidence that it was safe and effective for such use. By the way, in the spirit of “someone will always tell,” several employees blew the whistle on the pharma behemoth. No doubt the settlement has caused Abbott investors, stakeholders, competitors and the industry in general, to pause. Before you think Abbott is doomed because of a reprehensible thing like this, 11 days following this settlement, Abbott Laboratories reported better-than-expected earnings as sales surged on its injectable arthritis drug, Humira. So, no tears for Abbott, unless they regard ongoing settlements as business as usual and don’t actively adhere to a zero tolerance policy for illegal practices. In that case, we should weep for the industry as a whole. Time will tell.”

Abbott, has a very different story to tell. In their mia culpa press release regarding the settlement, Laura J Schumacher, Executive Vice President, General Counsel and Secretary says, “The company takes its responsibilities to patients and healthcare providers seriously and has established robust compliance programs to ensure its marketing programs meet the needs of health care providers and legal requirements.” As Mr. Crew says, time will indeed tell. However, everyone would do well to heed the warning. According to Deputy Attorney General James M. Cole, “Today’s settlement shows further evidence of our deep commitment to public health and our determination to hold accountable those who commit fraud. We are resolute in stopping this type of activity and today’s settlement sends a strong message to other companies.”

In the meantime, if any pharmaceutical companies are looking for help to ensure that their marketing practices are compliant, please remember SRxA is here to help.

About 170 million people worldwide are estimated to have been infected with Hepatitis C.

Currently there is no cure for this bloodborne, liver destroying virus and until recently there has been no specific treatment. Although interferon injections have been used, the  flu-like symptoms and other side effects often lead patients to discontinue or delay treatment.

However, in the last two years, two new injectable treatments were approved for use and clinical trials of oral medicines demonstrate promising results.

Earlier this month Abbott Laboratories released impressive data from a small mid-stage trial combining its experimental protease inhibitor ABT-450 boosted by the antiviral drug ritonavir, along with a polymerase inhibitor and ribavirin. The combination achieved a 95% cure rate in one arm of the study.

Separately, Gilead reported results from the Electron study, showing that of 88% of the 25 patients who completed 12 weeks of treatment with GS-7977 and ribavirin, had undetectable levels of virus four weeks after completion of treatment.

And last Thursday, at a liver disease meeting in Europe, researchers released interim data showing that a combination regimen of  GS-7977 from Gilead Sciences Inc and daclatasvir  from Bristol-Myers Squibb Co led to a 100% response rate in previously untreated patients with the most common form of hepatitis C.

GS-7977 is a nucleotide polymerase inhibitor. Daclatasvir  is from a new class of drugs known as NS5A inhibitors. Both are designed to block enzymes essential to replication of the hepatitis C virus.

The experimental drugs were considered to be well tolerated with the most frequent side effects being fatigue, headache and nausea. Full results from the trial are expected later this year.

Despite these promising results the 2 companies have decided not to pursue a collaboration.  Gilead is now commencing a trial of GS- 7977 in combination with its own experimental NS5A inhibitor, while Bristol-Myers is testing its drug daclatasvir with a compound similar to GS-7977.

The race for a cure seems to be well and truly on…and whoever comes first the real winners will be the people already infected.

The pharmaceutical industry has been under attack again this week. It’s not unusual for people to complain about the price of medicines and the fat profits of pharma, yet even when the industry tries to reduce the payment burden, or provide educational assistance, it is criticized.

First, there was a series of lawsuits filed by several union health plans against eight large drugmakers. They charge that, rather than save consumers money, prescription drug coupons illegally subsidize co-pays for brand-name meds and can actually increase health insurance premiums.

Then the US Department of Veteran Affairs issued a tough ruling on how sales reps can promote drugs to VA medical facilities in the future. One of the new restrictions concerns educational programs. Starting next month, reps will have to submit educational materials for VA review 60 days in advance of any scheduled meeting.  Additionally, materials will be approved only if industry sponsorship is adequately disclosed; if industry-sponsored data is adequately compared with non industry-sponsored data and if materials do not contain a company name or logo.

Both of these developments are worrying.  The pharmaceutical industry is already the most regulated business in the world. Further restrictions will result in fewer incentives to bring new drugs to market and will further stifle innovation.

Not convinced that it’s time to give pharma a break?  Then consider this:

During the Super Bowl, a representative of Eli Lilly posted the on the company’s corporate blog that the average cost of bringing a new drug to market is $1.3 billion. A price that would buy 371 Super Bowl ads, 16 million official NFL footballs, two pro football stadiums, pay almost all NFL football players, and every seat in every NFL stadium for six weeks in a row. This is, of course, is ludicrous.

Ludicrous and wrong!   In fact, the average drug developed by a major pharmaceutical company costs at least $4 billion, and it can be as much as close to $12 billion.

However, in all fairness to our Lilly rep, the drug industry has been tossing around the $1 billion number for years. It is based largely on an industry sponsored study by Joseph DiMasi of Tufts University performed 12 years ago. It’s always been a nice number for the pharmaceutical industry because it seemed to justify the idea that medicines should be pricey without making it seem that inventing new medicines is so expensive an endeavor as to be ultimately futile.

But as can be seen from the table above, that figure is badly outdated.

The range of money spent is stunning. AstraZeneca has spent $12 billion in research money for every new drug approved, as much as the top-selling medicine ever generated in annual sales. Bristol-Meyers Squibb spent just $3.7 billion. At $12 billion per drug, inventing medicines is a pretty unsustainable business. At $3.7 billion, you might just be able to make money –assuming it can keep generating revenue for at least ten years.

So, why is the cost of drug development so high?  Well, a single clinical study can cost $100 million, at the high end. But the main expense, and the main reason for the differences noted above, is failure of potential new drugs during their development.

Has this blog helped to change your views on the industry? As always, SRxA’s Word on Health would love to hear from you.

SRxA’s Word on Health can’t help but wonder how Abbott employees are feeling today after learning that 3,000 jobs are to be cut.  According to Bloomberg, the corporate axe will fall as part of the company’s restructuring plan following its acquisition of Solvay’s pharmaceuticals business.

How ironic and painful it must be each time they see their corporate mission statement:  “A Promise For Life.”

So who will stay and who will go?  According to the company, most of the positions to be eliminated will be in sales, corporate staff, manufacturing and research.  While we’re not quite sure who that leaves, we do know that there will soon be a lot more pharma people out there looking for jobs.

Though few Abbott workers will take comfort from the fact that the restructuring will result in savings of $810 to $970 million over the next two years, they are certainly not alone. 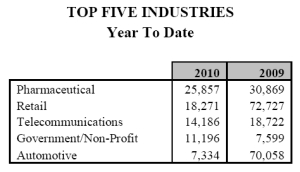 In the last quarter alone, Astra Zeneca, Merck, GlaxoSmithKline, Pfizer, Roche, Takeda, and UCB have all announced significant reductions of their sales force.

It’s all a far, far cry from the pharmaceutical industry zenith of 2004 when roughly 105,000 sales reps were employed in the US.

SRxA is here to help.  Contact us today to learn how we can help you to create and deliver successful programs in these changing times.