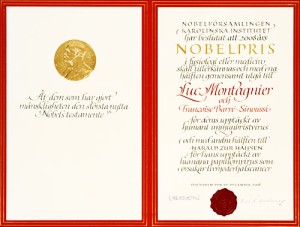 Dr. Luc Montagnier, the French virologist who won the Nobel Prize in 2008 for discovering the AIDS virus, has surprised the scientific community with his strong support for homeopathic medicine.

In a remarkable interview published in Science magazine, Professor Montagnier expressed support for the often maligned and misunderstood medical specialty of homeopathic medicine. Although homeopathy has been around for >200 years, most conventional physicians and scientists have expressed skepticism about its efficacy due to the extremely small and highly diluted doses of medicines used.

Montagnier disagrees. “I can’t say that homeopathy is right in everything. What I can say now is that the high dilutions (used in homeopathy) are right. High dilutions of something are not nothing. They are water structures which mimic the original molecules.”

His experimental research confirms that even after sequential dilution, electromagnetic signals of the original medicine remains in the water and can have dramatic biological effects.

Montagnier has just taken a new position at Jiaotong University in Shanghai, China where his work will focus on the phenomenon of electromagnetic waves produced by DNA in water. He and his team will study both the theoretical basis and the possible applications in medicine.

He is confident  that these new observations will lead to novel treatments for many common chronic diseases, including but not limited to autism, Alzheimer’s disease, Parkinson’s disease, and multiple sclerosis.

In the Science magazine interview Montagnier also expressed real concern about the unscientific atmosphere that presently exists on certain unconventional subjects such as homeopathy. When asked if he is concerned that he is drifting into pseudoscience, he replied adamantly: “No, because it’s not pseudoscience. It’s not quackery. These are real phenomena which deserve further study.”

This is in stark contrast to the recent statement from the British Medical Association who referred to homeopathy as “witchcraft.”

So, who’s right?  SRxA’s Word on Health wonders if it’s the case that when one goes on a witch hunt, one inevitably finds “witches!”

Let us know what you think.