Transdermal Specialties Inc. (TSI) is hoping to change the face, not to mention the abdomen, upper arm and thighs, of patients with diabetes.  The company’s new “Set IT And Forget IT” insulin delivery system will be unveiled at the American Diabetes Association’s 72nd Annual Scientific Meeting, June 9 -11, 2012 in Philadelphia.

Called the U-STRIP™, this breakthrough product is a programmable transdermal insulin patch which offers totally non-invasive insulin delivery for both Type-1 and Type-2 diabetic patients.

Using a patented alternating ultrasonic waveform process to enlarge the diameter of the skin pores, the U-Strip enables large molecule drugs, such as insulin, to permeate through the skin into the dermis and then into the blood stream. All without needles!

According to TSI, the key advantages of the U-Strip include:

12 clinical trials in over 125 diabetics have already been successfully completed. The company hopes to complete the last two clinical trials needed for FDA approval in the next 18 months.

The HPT- 6 trial will investigate whether the patch can reach the same glucose levels as a pump with less insulin, and will also compare the speed of delivery vs. injection to determine if the patch can be more effective in morning glucose reduction for those patients waking with high blood sugar levels.

The HPT-7 trial (slated for 2013) will focus on a real-world study of 500 Type-2 diabetics, who will conduct an at-home study to track their A1C levels. The A1C test measures average blood glucose control for the past 2 to 3 months.

“The U-Strip represents a major advance in diabetes care” says Bruce K. Redding, Founder, President and CEO of TSI. “The insulin patch component offers a safe and painless alternative to injections with the promise of reduced side effects and improved insulin uptake efficiencies for the patient. The ultrasound actually reduces the quantity of insulin needed for effective glucose control and speeds the delivery over a pump or even direct injection. Improved patient monitoring and reporting of the Control Device enables better tracking of treatment programs and the new “Set-it and Forget-it”  function means more regular glucose control during both evening and daytime hours. 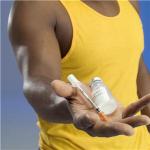 All of which sound like good news for the 27 million diabetics in the US, who eagerly await an alternative to injections. Over the years, various attempts, some more successful than others, have been made to capture this $3 billion market.

SRxA’s Word on Health will be keeping a watch on all diabetes developments and we’ll bring you further news as it happens.

The number of clinical trials being conducted in developing countries has surged in recent years but the legal and ethical frameworks to make them fair are often not in place. This was one of the key messages to emerge from the 7th World Conference of Science Journalists, held in Qatar, last month. In 2008 there were three times as many developing countries participating in clinical trials registered with the FDA than there were in the entire period between 1948 and 2000.  These figures included many “transitional” countries, such as Brazil, China, India, Mexico and South Africa. The attraction for the pharmaceutical industry of doing studies in such countries includes lower costs and the availability of “treatment-naive” patients, i.e. those who have not been previously exposed to other drugs or enrolled in other studies. For developing countries, the main incentive for involvement with clinical trials is the promise of advanced medical science and access to the latest medications. However, the process of establishing and enforcing a legal and ethical framework to protect study participants is not always keeping pace.

While many countries have set ethical standards for clinical trials, they are not always being followed, by either the sponsor or the investigator. “Less stringent ethical review, anticipated under-reporting of side effects, and the lower risk of litigation make carrying out research in the developing world less demanding,” said Professor Ames Dhai, Director of the Steve Biko Centre for Bioethics, South Africa. The conference noted that in places such as South Africa, where it’s mostly poor people with low literacy levels and a culture to accept authority without question, there is the potential for ethical misconduct.  “The greatest challenge in moving to mutual benefit is balancing the needs of biomedical research with the full protection of research participants and communities,” said Dhai. If this can be achieved, clinical trials can be highly beneficial for developing countries.  Not only will patients get access to life-saving drugs, the research itself can be used as a platform to enhance local skills, build genuine partnerships with the pharmaceutical industry, and attract funds to develop appropriate programs. Have you sponsored or participated in clinical studies in the emerging world? Share your experience with us.