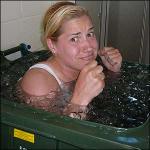 As a former marathon runner, I vividly remember having to endure ice-cold baths after heavy training sessions and competitive events in an attempt to reduce inflammation and speed up my recovery.  i also recall that this process was not only time consuming but also bone-chillingly painful.  While I enjoyed race running and even embraced the hours of pavement pounding leading up to competition, I loathed this recovery.  Each time as I sat shivering, I’d miserably moan to anybody who would listen that I’d be better off with a glass of wine, a nap in the sun, a hot bath and an early night!

So it was with mixed emotions I read about a new study that found ice baths aren’t all that effective.  And while I’m glad for the next generation of athletes, I can’t help but wish this has been published 20 years earlier.

The study, published in the European Journal of Applied Physiology, showed no mitigation of post-exercise strength loss or decreased soreness in subjects who engaged in post-exercise cryotheraphy, or ice baths, compared to a control group.

“It doesn’t help you feel better and it doesn’t help you perform better,” says lead researcher Naomi Crystal. “Ice baths are very popular as a treatment, but the research is really mixed as to whether they’re beneficial. They’re miserable. If it doesn’t work, you don’t want to waste your time.”

The researchers had 20 active college-age men run downhill at a grade of 10% for 40 minutes. Half the subjects then submitted to a 20-minute ice bath, standing in a tall recycling bin filled with thigh-high ice water cooled to a chilly five degrees Celsius (40 degrees F).

They then measured the ice bath’s effect on soreness, strength, swelling and inflammation by conducting three post-exercise measures taken at intervals from one hour to three days:

The results showed no difference in strength or perceived soreness between the subjects who took ice baths and the control group. Thigh circumference did not change significantly for any of the subjects after the run.

Difference between the two groups’ CCL2 concentrations, while not statistically significant, showed a trend toward lower concentrations in the cryotherapy subjects, although this measure varied greatly between the subjects.

Although the researchers conclude that their study does not support the use of cryotherapy for recovery from exercise, Crystal’s personal view is more moderate. “I’m not convinced that it doesn’t help at all,” she says. “Use them sparingly. Use them in tournament situations, use them with an athlete who has done something extraordinary. But for day-to-day athletes, I wouldn’t recommend them. They’re painful, and they’re time consuming.”